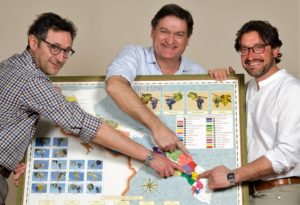 From Italy to Poland, across England …

The International Jury of the Wine Expo Poland Awards (important wine fair for Eastern European countries) has awarded the Negroamaro Salento Igt and Primitivo Salento Igt with the Gold Medal, and the Copertino Doc with the Silver Medal. The Jury – composed by experts, journalists and sommeliers –  awarded the three Cupertinum’s wines claiming that these wines “are an expression of the Salento area and stand out for their elegance, harmony and complexity”.

The I Vini d’Italia de L’Espresso Guide awarded the Settantacinque Copertino Rosso Riserva. This is what the curators, Andrea Grignaffini and Antonio Paolini, say: “We are in the heart of Salento, between red lands and bushed vineyards, with a cooperative that has the talent to express the most visceral and sublime Mediterranean spirit in each bottle. Citrus seduction, red orange, balsamic and resinous profile, oriental spices and supervised oxidation. On the palate, it reserves exciting accelerations with a melted and reactive acidity and tannins, the finish has a ferrous and inebriating tone. The Settantacinque Copertino Rosso Riserva is among the best 100 wines to drink now, that are enjoyable immediately, but will also be later” and they add that the Cupertinum is a “must-have for lovers of Negroamaro”. In addition, among the Copertino Denomination of Controlled Origin, the first two classified are Cupertinum’s wines: the Copertino Doc and the Copertino Doc Riserva.

This is a recognition that confirms the Golden Star awarded, by the Vinibuoni d’Italia Guide of Touring Club, to the Settantacinque. It is the third Golden Star won by the Cupertinum wines in the last six years. Even the Guida ai Piaceri e ai Sapori della Puglia (Guide to Pleasures and Flavors of Puglia) of La Repubblica rewards the Settantacinque with 5 Stars, the maximum score; and the Vitae (Guide of AIS – the Italian Sommelier Association) gives to Settantacinque  the Moneybox symbol for its quality-price ratio. A wine about which everybody agrees!
Not enough: the Glykós Passito Igt Salento is awarded the Dolce Puglia Prize by the Italian Sommelier Association. “The Glykòs is an elegant and powerful wine with ample gustatory suggestions, a deep ruby ​​red with garnet reflections, with hints of cherry, plum, myrtle and licorice root”, the AIS Jury supported.

A nice series of awards also come from the 2018 Guides:
* The SlowWine Guide confirms that “wines are an expression of the territory and are distinguished by legality, harmony, body, with an excellent relationship between the quality and price”, with mention of merit to the Spinello dei Falconi Rosato Igt Salento, the Copertino Doc and Salento Igt.
* The I Vini di Veronelli guide confirms the positive judgments of the previous editions and assigns the 2 Stars to the Negroamaro, the Copertino Doc, the Settantacinque and Primitivo.
* Luca Maroni, theoretician of the”wine-fruit” concept, and his Yearbook of the Best Wines from Italy likes the “really good” Salento Igt wines: Glykòs, Primitivo, Squarciafico Rosato, Spinello dei Falconi, Negroamaro.
* Bibenda, the guide of the Italian Sommelier Foundation, praises the overall quality project of the winery, assigning 4 Grapes to the Seventy-five and Glykòs, and 3 Grapes to the other wines “very respectable, beautiful expression of the territory, which have earned an excellent reputation also abroad”.
* Vitae, the guide of the Italian Sommelier Association, rewards the Settantacinque with the Moneybox: wine with the best quality-price ratio, and with 3 vine-shoots also the Glykòs, and it highlights the high quality of the whole range of wines.
* In addition to the Golden Star assigned to the Settantacinque, the Vinibuoni d’Italia Touring Club Guide also reports the Negroamaro with 4 Stars and the Copertino Doc, the Primitivo, the Spinello dei Falconi with 3 Stars, adding that “these wines” price quality is crazy “!
* Paolo Massobrio and Marco Gatti, in the Golosario, their zibaldone of Italian taste, reward the Copertino Doc Riserva and Primitivo Salento Igt as TOP wines.

Finally, the English critic Simon Woolf on Decanter, writes: “… the Cupertinum, one of the oldest and largest cooperatives of Salento, gives a brilliant example with its Copertino Riserva … really delicious”.

Winemaker Giuseppe Pizzolante Leuzzi is satisfied: “We won these prizes with wines based on Negroamaro and Primitivo, the two grape varieties symbol of Salento, highlighting the specificity of the terroir. And the DolcePuglia award at Glykòs makes us very happy, it is a wine we are proud of: it is absolutely the first pure negroamaro that has ever been made “. The president Francesco Trono adds: “These awards are a confirmation of the quality project desired by the members and carried forward with determination by all the staff of the winery”.