The Cupertinum Vineyard on the Castle: the first and only in the world! 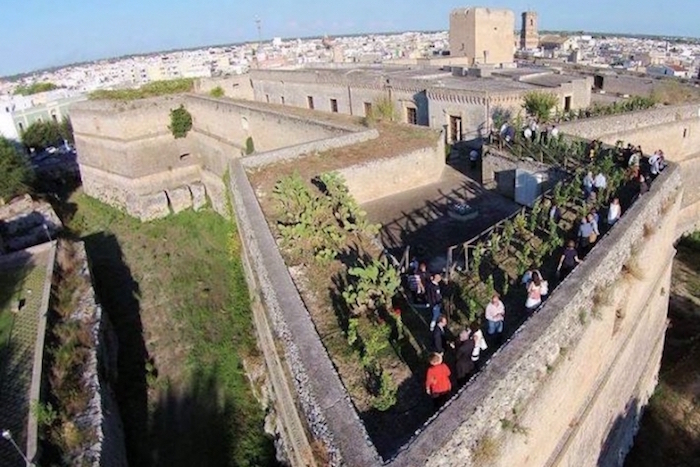 The only and the first in the world! It is the Cupertinum Vineyard on Castello Angioino di Copertino A virtuous territorial and planetary circuit between quality production, culture and tourism, this is basically the Vineyard on the Castle. It is a project born from the collaboration between the Cupertinum, the Ancient Winery of Salento, the Superintendence for Architectural and Landscape Properties of Lecce, Brindisi and Taranto and the Direction of the Copertino Castle. Giuseppe Pizzolante Leuzzi, oenologist of the Cupertinum, presents us with this interesting novelty: “The ‘Cupertinum Vineyard on the Castle’ project will revive history, while historical documents testify that the high parts of the castle, walls and walkways of Castello Angioino Copertino – which by size and grandeur of the plant is to be counted among the most imposing defensive structures – were used as hanging gardens and cultivated with vineyards and olive groves. In 2013, as Cupertinum, Ancient Winery of Salento, we proposed the project to the Director of Copertino Castle and the Superintendent who welcomed and authorized enthusiastically the project. This is a unique and original project that has no precedent either in Italy or abroad. The vineyard is set on the ramparts and was planted in April 2014 with an Apulia sapling system and quinquelles rows. The cultivar, chosen in Otranto’s “Alberto Negro” barbatelle greenhouse, is Cannellino Negroamaro, an ancient variety that has been discovered in recent years.” The Superintendent Francesco Canestrini and the Castle Director Caterina Ragusa argue that “the Vineyard on the Castle project” brings together and enhances the most original aspects of the culture and cultivation of Copertino and Salento. The history of Copertino, the history and the beauty of its castle, the historical importance of Salento’s viticulture are merged into this project, innovative and at the same time dense with historical references.” “Since its founding – adds President Francesco Trono – the Cupertinum, co-operative winery established in 1935, has always struggled for territory and quality, enhancing the relationship with the local culture. It is no coincidence that the bottles at Copertino Doc carry the Castle portal as an emblem, while the wines at Igt Salento, Squarciafico and Spinello dei Falconi, are dedicated to noble families who lived in the Castle.” The City Administration is also enthusiastic about the project: “If (agriculture) culture and culture have the same etymological root – says Mayor Sandrina Schito – it means that it is precisely on this connection that we must continue to work for enhancing our city, territory, Producers and quality products “. And Pizzolante Leuzzi concludes: “Let’s meet in a few years for the presentation and for the tasting of the first wine of the Castle. The first in the world! “