Luciano Ferraro on Corriere della Sera writes of the Vineyard on the Castle! 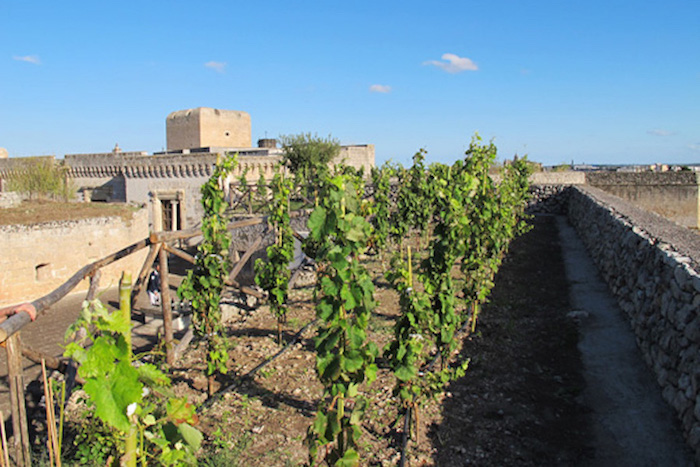 Magnificent article by Luciano Ferraro on Corriere della Sera and on Divini.Corriere.it (here the link: http://divini.corriere.it/…/e-sopra-il-castello-spunto…/) dedicated to Cupertinum and our project “the Vineyard on Copertino Castle”.

And over a castle came up a vineyard

The vines are suspended between the earth and the sky, on the ramparts of Castello Angioino in Copertino, Apulia. It is the only fortified vineyard in the world. The idea is of the local social winery, Cupertinum, approved in record time by the Superintendence of Lecce, Brindisi and Taranto. One hundred screws of Negroamaro Cannellino between the fort’s four strongholds. A leap back of five centuries, when on the tallest terraces grew vines and olives to resist in case of siege. In a “beautiful red soil, more beautiful than the red of Siena,” Carmelo Bene wrote “a nomadic land, spins on itself. For nothing. To this South” – the claimed actor (remembering the saint patron of flights, Giuseppe Desa da Copertino) said “there’s nothing left but to fly.” And somehow, the Copertino screws fly too.

Cupertinum is an historic wine company in Apulia, and this year it celebrates 80 years. The president is a young agronomist, Francesco Trono. The oenologist is Giuseppe Pizzolante Leuzzi, a sailor passionate, who took the wine heritage of Apulian pioneer Severino Garofano). He has come with the idea of ​​”cultivating the castle. “Our historical label – he says – has always depicted the portal of the castle. When the director of the castle told me that once there were vineyards and olive groves on the ramparts, I thought that we had to combine the two symbols of Copertino: the sixteenth century fort and our winery. I spent a whole summer with the hoe up there, between weeds and figs, to look for traces of old plants, but I did not find them. So we planted a hundred barbatelles of an ancient early variety, rediscovered by Antonio Calò, president of the Italian Academy of Vine and Wine.” The intention is to produce, in a couple of years, a Negramaro in purity. In a few days, the vines on the castle, planted in April, will be baked for the first time. “They are already a couple of feet high – says the oenologist – an extra reason to visit the castle.” Cupertinum has 350 members, especially small farmers. Four hundred hectares in total. It produces one million bottles, a large part is exported to Northern Europe. “We are strong above all in Sweden,” says Pizzolante Leuzzi, “so much that a Swedish estimator called a racing horse with the name of our winery. The strong point is the Copertino Rosso Riserva, almost a wine from other times, which expresses all the strength of Salento’s land (at Vinataly will be presented the 2008 vintage). A Negramaro with touches of Malvasia and Montepulciano, at a low price in relation to quality, between eight – nine euros. Wide range of wines: from the Primitivo to the soft rosé Spinello dei Falconi, to the White Cigliano, to the Squarciafico Bianco and Rosato and to the last born, the remarkable Glycòs Passito, always based on Negramaro. Wines who Giuliano Sangiorgi, frontman of Negramaro band, knows well, grown up in the shadow of this castle. “More than the song of the earth,” Sangiorgi wrote, quoting an historical phrase from the critic Luigi Veronelli, “I believe that wine is the singing of people living on earth. Man is the song of the earth.” Like the 350 winemakers of Cupertinum with faces of other times portrayed in the corporate newspaper. Children of a land that has learned to fly.