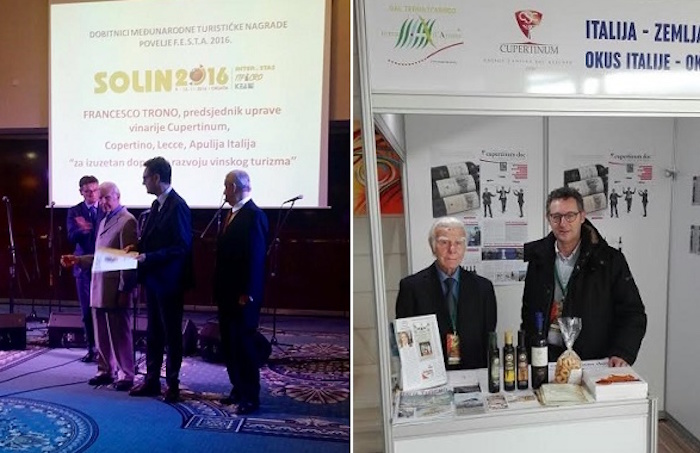 Cupertinum, Ancient Winery of Salento 1935, was acnknowledged the 34th edition of the prestigious European Award for Tourism and Hospitality as the oldest cooperative winery in the province of Lecce and one of the oldest in Italy, as well as for the commitment shown in the Valorization of the tourism, of the territory of Copertino and for its project “the Vineyard on the Castle of Copertino”. The ceremony took place in Solin, a gorgeous tourist village in Split, Croatia, under the 19th International Tourfilm Festival. In addition to Cupertinum, this year the Prize went to two other Apulian companies: the GAL Terra d’Arneo, chaired by Cosimo Durante, and the Enoic Art of Arianna Greco. A good result for Salento, no doubt!

We are proud of remind you that in previous editions, the European Award for Tourism and Hospitality has been given to distinguished personalities such as chefs Paul Bocuse, Gualtiero Marchesi and Domenico Maggi, directors such as Franco Zeffirelli and Krzysztof Zanussi, and famous hotels such as Bernini Bristol and the Grand Hotel in Rome. The event was organized under the patronage of the Croatian Tourist Board and of the cities of Solin and Split, and with the High Patronage of the President of the Republic of Croatia, Kolinda Grabar-Kitarovic.

Francesco Trono and Giuseppe Pizzolante Leuzzi, respectively Cupertinum President and Winemaker, emphasize the social and cultural value of this recognition: “The Copertino Castle, which we have proudly as emblem on the labels of our wines with Copertino Doc, aswell as the Vineyard project on Castle have become a keystone for the future of the territory. Our wines are true ambassadors of Copertino and Salento in the world. Wine quality, land-use and artistic beauty, remind us that (agriculture) culture and culture have the same root. With this awareness, we look confident to the future”, “and add:”Winery members and call citizens from Copertino have to be actors of a major renewal, which affects agriculture in general and our small business in particular. We need to create links with other local values, and institutions, to make our involvement felt, from promotion to the exploitation of the soil and its agriculture. Create synergies. We start from our microcosm and therefore, first of all, from quality wine production and then from the many indigenous geniuses, the spiritual richness of St. Joseph from Copertino, the Angioin Castle, the natural and cultural beauties, inserting our specific features into the most general of Salento and Puglia. The future is in the soil!